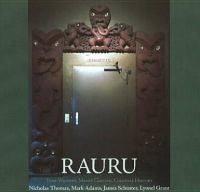 Rauru : Tene Waitere, Maori carving, colonial history, editor, Nicholas Thomas ; photographs, Mark Adams ; interviews, Lyonel Grant and James Schuster.
"The life and work of Maori carver Tene Waitere (d.1931) are published in an oversized format (11.5x11") and filled with period and modern photos of his work, including that in European collections and European buildings, such as the substantial collection held by the Museum fur Volkerkunde in Hamburg, Germany. Rauru is the highlight of this famous anthropological museum while Hinemihi sheltered survivors of the Tarawera eruption in 1886 before being removed to the gardens of an English country house! Three out of four historic Maori meeting-houses located outside New Zealand were carved or partly carved by Waitere. Regarded by many as the most innovative Maori carver of his time.

Te Heuheu : a people of the great lake, by [Kelly Te Heuheu].
The Te Heuheu whanau of Ngati Tuwharetoa (Taupo district) trace their lineage back to those arriving on the canoe known as Te Arawa who landed at Maketu in the Bay of Plenty. It draws on several sources of writing and images to provide insights into biographies of the chiefs and family members, land, mountains, lakes, rivers and streams.

Te Arawa, by D. M. Stafford. (2002)
This is the authoritative history of Te Arawa, the iwi that occupies the Rotorua lakes district and part of the central Bay of Plenty coastline.

Pukaki : a comet returns , by Paul Tapsell ; foreword by Grahame Hall. (2000)
Pukaki is the ancestral father of Ngati Whakaue, a hapu (sub-tribe) of Te Arawa of Rotorua. This book is an ancestral history but much more. As well as the stories of this great chief and his many descendants, the book relates the recent, controversial history of the carving of Pukaki that featured in the Te Maori exhibition, its origins, how it was acquired by the Crown, and how Ngati Whakaue regained it from the Auckland Museum in 1997. Shortlisted for the 2001 Montana Book Awards. (drawn from Reed books)

Makereti : taking Māori to the world, by Paul Diamond. (2007)
She was born on October the 20th, 1872, at Whakarewarewa, and died on April the 16th, 1930, in Oxford. Makareti, sometime chieftainess of the Arawa Tribe of the Maori of New Zealand, is better known to the world as Maggie Papakura, the famous hostess and guide to the hot springs and geysers of the Rotorua district
When she removed to England, she brought with her all her possessions, including the carved house with all its furnishings and the ancient carved pataka, greenstone and other weapons and ornaments, feather and flaxen cloaks, and everything that could possibly explain the life of the old Maori in all its aspects. These it was her delight to show to her friends.... No people ever had a better ambassador and interpreter than the Maori had in her. (drawn from Old Time Maori, 1938) A fascinating life retold.

993.116 TAP
Tapsell, Enid. A history of Rotorua : a brief survey of the settlement of Rotorua and environs by our pioneers, Maori and Pakeha. 1972.