The Parihaka album : lest we forget, by Rachel Buchanan.
A photo album doesn't tell you the whole story about a family, and this book doesn't tell the whole story of Parihaka. Rather it prompts you to look at Parihaka from a different angle...it is a story about my relatives - Te Ati Awa, Taranaki, Ngati Ruanui, British.... (book jacket). The 1881 invasion of Parihaka was one of the most important and disturbing events in New Zealand history which left a powerful and complicated legacy. The Parihaka Album: Lest We Forget tracks the author's journey of discovery of her family's links with Parihaka and uncovers some forgotten stories and blind spots in that history. (drawn from the publisher's description)

Contested ground : the Taranaki Wars, 1860-1881 = Te whenua i tohea / edited by Kelvin Day.
2010 marked the 150th anniversary of the start of the Taranaki Wars, and this thoughtful and informative volume helps shed new light on the people and political landscape of 19th century Taranaki and the legacy of the wars on the history of Aotearoa New Zealand. Essays include : 'Origins of War in North Taranaki', by Danny Keenan, 'Ripples Reach Te Tau Ihu', by Maui John Mitchell and Hilary Mitchell, 'The Strategy of War: The Taranaki Wars and the Development of Maori and British Strategy', by Richard Taylor and 'New Kind of Resistance: Parihaka and the Struggle for Peace', by Hazel Riseborough

Māori life in old Taranaki / John Houston ; foreword by Danny Keenan.
30 chapters of material which ranges over topics such as migratory canoe stories, the origins of place names, proverbs and sayings, karakia and waiata, Hauhauism and traditional lore as well as indepth coverage of the armed conflict that rent Taranaki asunder during the nineteenth century. (drawn from the book jacket). The late John Houston, the author of this valuable book on the Maori history of the Taranaki district, was for 30 years a student and recorder of Maori history and lore. âMaori Life in Old Taranakiâ brings together the articles which he wrote over many years; it was edited posthumously by Mr C. R. H. Taylor, formerly Chief Librarian of the Alexander Turnbull Library....The book gives the reader glimpses of pre-European days, and touches upon various aspects of the period of early settlement, the conflicts, and subsequent events that today are of historical importance. (drawn from 1966 Te Ao Hou review of earlier edition) 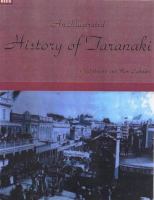 Taranaki : an illustrated history, by Ron Lambert and Gail Henry.
Recounts the story of people in the Province over a period of nearly 1000 years from the arrival of the first Maori colonists, to the settlement by the Plymouth Company in the 1840s, the subsequent clash of these two cultures and the rapid social and economic changes which followed in the following 150 years. Published first in 1981, the book has been brought up to date with the inclusion of more recent developments following the changes initiated by the third Labour Government in the 1980s. The book has an extensive Index and the Selected Bibliography provides opportunity for further reading. 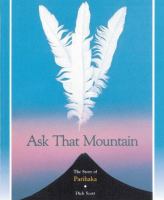 Ask that mountain : the story of Parihaka, by Dick Scott.
The book draws on official papers, settler manuscripts and oral histories to give the first complete account of what took place at Parihaka. Parihaka has become a byword for Maori refusal to yield land, culture and dignity to New Zealand's colonial government. Well after the end of the New Zealand Wars, the people of this small settlement at the foot of Mt Taranaki held out against the encroachments of Pakeha settlers in a struggle that swapped the weapons of war for the weapons of peace.Now in its ninth edition, this seminal work was in 1995 named by the Sunday Star-Times as one of the ten most important books published in New Zealand. (drawn from publisher's decription)

Ngāti Ruanui : a history , by Tony Sole. (2005). 993.12 SOL
Tony Sole (Ngati Ruanui, Nga Ruahine) begins with a story of nineteenth-century resistance, then travels back in time to a South Taranaki account of the origin of the universe. The Asia/Pacific origins of Ngati Ruanui are explored as the story told by contemporary DNA sequencing technology is placed alongside Maori traditions of the ancestral journey from the Pacific which ended in Taranaki.
Numerous whakapapa charts, waiata, and whakatauki (genealogical tables, songs and proverbs) appear along with maps and photographs . (drawn from Huia Books)

993.12 MacD
McDonnell, Thomas, 1832-1899. An explanation of the principal causes which led to the present war on the west coast of New Zealand : in defence of the action taken by Lieut.-Col. Thos. McDonnell, whilst commanding the Patea Field Force, with a suggestion to future operations. Originally published 1869, fasc. ed.

779.2 PAR
Partington,W.H.T. Te Awa : Partington's photographs of Whanganui Maori. 2003.
"Photographs taken ... between 1891 and 1908 ... containing images from Taumarunui to Putiki ... features people from all parts of the Whanganui River"--Back cover.